This series of posts identifies the reforms proposed in the exposure draft of the Te Ture Whenua Māori Bill. It does not take a position on them. Instead, it attempts to capture some of the key changes in a summarised format and notes the concerns raised in various forums. It is not written on behalf of any organisation. It is my personal summary having read through the consultation document and various websites and forums.

For the past 150 years or so, Māori have endured extreme alienation from our whenua through a multitude of racist laws. In 1993, the enactment of the Te Ture Whenua Māori (TTWM) Act was the result of immense effort by Māori to retain and protect the land still in our posession. It’s no wonder then, that many Māori – landowners or not, are incredibly apprehensive about the proposed changes to the TTWM Act.

The proposed changes in the exposure draft claim to:

The outcomes expected from the reforms:

Key Changes proposed by the reforms: 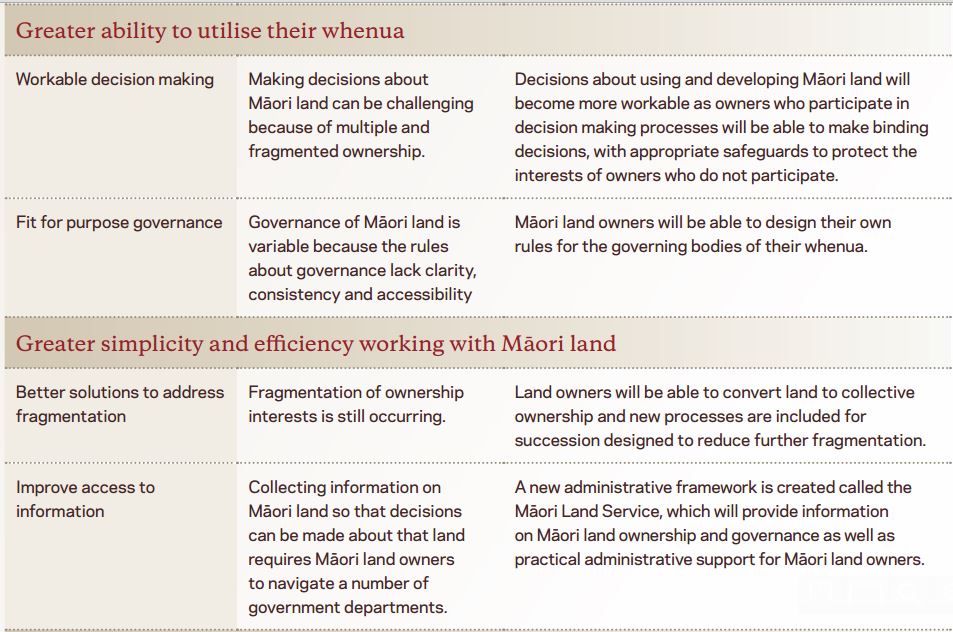 Upfront, that looks fine. But concerns have been raised in many forums regarding compliance costs, and the ability of a few to make decisions over the many. The latter concern generally relates to decisions to dispose of Māori land, i.e. gift or sell. It’s a concern because under Crown law, Maori land comprises only 5% of the total land in Aotearoa.

There has also been a lot of discussion about rushing this piece of legislation through without appropriate consultation. That being said what we are asked to submit on is at this stage only an exposure draft. This means that the draft proposed is not definitive, and has not even proceeded to parliamentary process yet.

The hui and workshops or clinics are said to represent an additional layer of consultation, the suggestion being that these will help to ensure that the needs and aspirations of Māori landowners and their whānau and hapū are reflected in the Bill presented to parliament. There will also be another opportuntiy to make a submission on that Bill when (or if) it passes the first reading and gets to the Select Committee process.

The thing about submissions is that we often use them just to oppose the things we don’t like. It was brought to my attention recently, that it’s good practice to also state our support for any parts that we do like. The reason being that the Advisory Committee are not mindreaders. If there is no explicit support for a provision there is a risk that it might be removed due to lack of support expressed in submissions. As such, it’s a good idea to stipulate the parts of the current Act that you wish to retain, and any parts of the draft Bill that you think are worth including in the final cut, together with any concerns or issues you have with the draft provisions.

The submissions template is divided into sections. You can view or complete a copy of the template here. Over the next few days I will deal with each of these sections highlighting both the good, bad and perhaps dubious bits. For now, it’s probably a good idea to get your head around the Consultation Document!